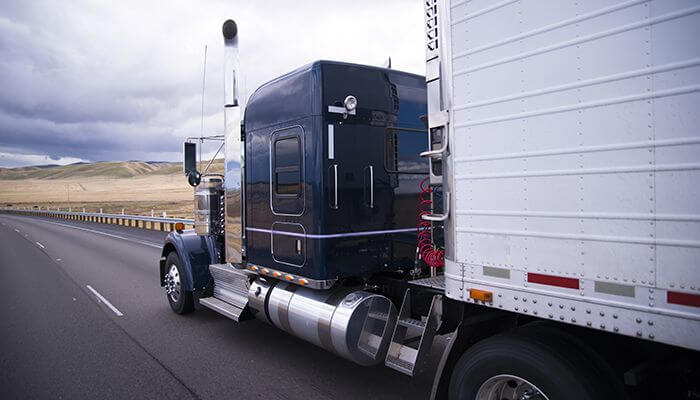 Englander Transportation president and CEO Carl Bumgarner is no stranger to the world of fleet management technology. As head of the private trucking firm Fleetmaster Express, he had seen firsthand the productivity and visibility benefits that were possible with real-time fleet tracking. So in 2014, when he purchased the former Englander Transport in Rustburg, VA, one of his first priorities was eliminating the manual processes that the company’s drivers used.

At the time, the company was using mobile phones, truck stop faxes, and paper logs to manage its operations. “We moved forward with implementing Omnitracs fleet management solution at Englander as soon as I purchased the company in 2014,” Bumgarner says. “I was already familiar with fleet management technology, and I knew the company needed that type of automation to run efficiently.”

Englander specializes in refrigerated transport of produce from the West Coast to the Virginia/ Maryland/Washington, D.C., region. Teams of two drivers deliver freight in Western states, then pick up loads of produce for the return trip. The two drivers work in shifts to ensure the produce makes it back East in a timely fashion, making a complete turn every five to six days. The company has 49 drivers operating 28 tractors.

Previously, Englander had virtually no visibility into where each of its drivers were until the drivers called the dispatcher. “With the solution in place, any time of day we can look on the Omnitracs Web portal and see each truck’s position on a map of the U.S.,” Bumgarner says. “It really helps us plan and schedule far better than we could before. Our produce customers also like having the ability to know where the trucks are, and the solution provides a customer portal so they can look at any loads that are consigned to them in real time.”

Each of Englander’s trucks are outfitted with an Omnitracs Mobile Computing Platform (MCP110), display screen, and location-based software. The system enables two-way communication between the trucks and Englander’s dispatchers.

Englander’s deployment of the Omnitracs solution went smoothly in part because many of the drivers had come from other companies that were already using fleet management technology. The company also provided a thorough training program so the drivers knew exactly how to use the solution before it went live in the trucks. In Englander’s case, it was an expected change. “A lot of our drivers said, ‘I wondered when you would be rolling out a solution like this,’” Bumgarner says.

Englander also made a point to show the drivers how the solution would benefit them. “I wanted this to be positive for the drivers, so the very first thing we did was eliminate the trip sheets they had to fill out every time they crossed a state line,” Bumgarner says. “For the first few months, all we did was make sure we got the fuel tax data. This way, the first experience the drivers had with the solution was that the technology just eliminated a bunch of work for them.”

“The first experience the drivers had with the solution was that the technology just eliminated a bunch of work for them.”Carl Bumgarner, Englander Transportation

Once the Omnitracs units were installed in Englander’s vehicles, the drivers still needed access to paper printouts of the load information to verify that they had picked up the right freight. In the past, the drivers would go to truck stops to wait for faxed documentation, but in that hectic environment the documents would often be lost and need to be re-faxed. Each fax also cost several dollars per page, and drivers wasted a significant amount of time parking, collecting their documentation, and getting back on the road. It was an inefficient and costly process that demanded a closer look.

“We’d call the driver, and determine a truck stop for them to go to. Then they’d have to go to the fuel desk and identify themselves. Half the time the people there didn’t know where it was, so they’d have to go back to the truck and call in,” Bumgarner says.

Englander looked at a mobile printing solution and determined that based on the cost of faxing the documents versus the cost of the printers and paper, they would see a return on investment in roughly one year by allowing the drivers to print the forms in the truck. “Based on how many faxes we were sending per truck, the payback was pretty clear,” Bumgarner says.

Englander uses TMW Systems’ dispatching solution, and a member of the Englander team spotted the Brother PocketJet mobile printer while attending the annual TMW conference. “He looked at the printer, and determined it was economical, simple to use, and reliable and rugged,” Bumgarner says.

Now, the buyer’s order documents are sent to the Omnitracs unit as a PDF via the solution’s Media Manager module. The drivers print the documents on the Brother printer in the truck, and then use those to verify that they’ve picked up the complete order.

Having the printers also improves the company’s safety program, according to Bumgarner. “The teams are running constantly, and the whole fleet is not in a regular pattern so we can’t have a big safety meeting with the drivers,” Bumgarner says. “We can use Media Manager to send out informative safety messages, back those up with real data, and then give them a short test to turn in so we can have that on file.”

Instead of making numerous phone calls, waiting for faxes, and filling out paperwork, most of the administrative work the dispatchers had been doing is automated. The TMW dispatch software sends order information to the drivers via the Omnitracs device. Drivers can print any documents they need in the truck, and provide status updates and other information in real time back to the dispatchers.

“One of our goals was to never handle anything twice,” Bumgarner says. “When the driver sends an update that he has arrived at a stop, that data comes back and automatically updates all of the fields in our back-end systems. The dispatcher never has to do that. In the past, if he called in we would have to do all of that manually, so we were doing redundant work.”

Englander also gets data on fuel mileage, idling, speeding, and other driver and vehicle information from the Omnitracs solution. “We receive all of that information automatically over the air, and the system assembles a report that is pushed out every Monday morning,” Bumgarner says.

In addition to the mobile printers, Englander very quickly switched to electronic driver logs once the Omnitracs technology was in the trucks. The company also tracks its IFTA fuel tax information, which has also saved drivers time because they no longer have to manually track all of that information.

The new solution has given Englander much greater visibility into where the drivers and freight are, and has eliminated time-consuming phone calls, costly faxes, and unnecessary paperwork for the drivers.

Surprisingly, deploying the fleet management solution also helped uncover and solve an idling issue that Englander management wasn’t even aware of. “I thought with a team operation that we wouldn’t see much idling, but we were seeing 25 to 30 percent idling once we had the data,” Bumgarner says. That was primarily because drivers were trying to keep the vehicles cooled down or warmed up, depending on the weather, while waiting on produce loads. Englander installed auxiliary power units on the trucks, which has helped cut idling down to single-digit percentages.

The company also established fuel mileage goals for the drivers and can measure performance against these goals because of the data provided by the fleet management solution. Previously, the trucks were only getting 5.5 miles per gallon. That has been boosted to 7.3 miles per gallon through a combination of lowering the top speed limit on the trucks, and investing in lighter and more efficient vehicles. The data from the fleet system is used to measure performance for the driver incentive program.

Up Next: Plans To Integrate Tire Pressure Monitoring

The company has continued to expand on the fleet monitoring solution. According to Bumgarner, the next step will likely be integrating tire pressure monitoring with the Omnitracs system to help drivers avoid blowouts and irregular tire wear.

The automated fleet management system has made life easier for Englander’s drivers and has given the company the data it needs to optimize both driver and truck utilization. “We’ve taken a lot of chores away from the drivers, which has also resulted in improved driver satisfaction,” Bumgarner says. “We know how many hours each driver has left, so we can maximize those hours as best we can.”

Put one to the test

Request a demo printer today, and put it to work.

Try one for free

Talk to an expert

Set up your virtual product demo, training, or meeting today.